Pinned: Never Change Streams in the Middle of a Horse 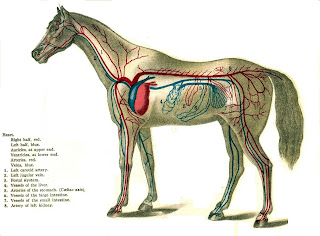 Did I ever tell you about the little red corpuscle who was swimming in the bloodstream of a horse?

This little corpuscle was always in a hurry. One day, he decided to play hooky from the school of red corpuscles, so he told his teacher he had a headache.

Well, this was a mistake. As he swam down the main artery, using the Australian crawl, he came to a fork in the stream - it was high tide.

The little red corpuscle took the fork on the starboard side. He proceeded to swim lazily down the new stream when disaster suddenly struck!

The little red corpuscle was swallowed by a huge virus.

The virus' name was Cyrus.

Thus, our moral: Never change streams in the middle of a horse!
Posted by K

One of the earliest and most profound mistakes made by American Patriots happened immediately following the Yorktown surrender of Cornwallis – Patriots failed to eject or kill every single Loyalist who was still on the continent.

Let us learn from that mistake and endeavor to extirpate every Enemy of Liberty on American soil as part of the remedy to the attempted coup against President Trump.

In the comment sections of the very few blogs & sites that are active and relevant in covering the 2020 election fraud and coup (Vox & Gateway Pundit are just about it, along with the feeds from Sidney, Lin, Jenna & Rudy), it is disturbing to see time and again smart and educated people posting comments along this theme: America has been under attack for decades, the Left has been at work since Reagan, it started with Kennedy, The commies are here now and winning, etc.

Point 1: Blaming ‘Communists’ is far too narrow to properly IFF the Enemies of Liberty who are active in America.  The Enemies of Liberty at work in America are, simply, manifestations of Evil.  They are many.  They come in all flavors.  Their labels are many and their labels come and go like cheap suits as they need to re-brand themselves.  Democrats become Liberals, who become Progressives, who become whatever.  "Leftists”, “Reds”, “Tyrants” are better labels, able to include every flavor of Evil with a single label.

But the common denominator is fundamental – they are all Evil.  The fight is simple: Good versus Evil.

Point 2: Reds have not been at work in America since Reagan, or ‘…in the last few decades…’ – they have been at work, on the ground, working their Evil by slow manipulation and incrementalism in America for well over 100 years.

J. Edgar Hoover was hunting communists in 1924 when he was named Director of the Bureau of Investigation, the predecessor of the FBI.

Later in the ‘50s, Senator Joe McCarthy was hunting communists who had worked their way into the federal government. The problem he ran into was that he was outnumbered. There were so many communists embedded in federal government offices, and elsewhere, they were able to shout him down. McCarthy died at just 48 years of age, under suspicious circumstances at Navy Medical (now Walter Reed), censured and despised.

Yet, when the Soviet Union “fell”, KGB archives identified 221 communists who had jobs in the Hoover Administration in 1931!!!  So, you can imagine how many were in place in the ‘50s when McCarthy was doing his work!

Anatoliy Golitsyn defected from the Soviet Union in December 1961. Golitsyn informed the CIA that the US Federal Government was thoroughly penetrated by Communists, and that the US was on the wrong end of a very sophisticated, long-term deception that was an existential threat to the USA. The threat, warned Golitsyn, included a secret pact between the Communists in the Soviet Union and those in China.

The CIA’s best counter-intelligence officer, the legendary James Jesus Angleton, perhaps one of the best ever, debriefed Golitsyn and certified his bona fi des. Golitsyn was correct; the Soviets, even then, owned the highest levels of US Government. Golitsyn was declared a fraud by CIA brass, and Angleton was smeared to the point that his credibility was reduced to nothing.

In 1976, John Brennan voted for communist Gus Hall in the Presidential Election. Soon after, Brennan was accepted into the CIA, after freely admitting that he voted for a Communist. This was the beginning of Brennan’s career in American Intelligence.

In 2016, top officials in the Obama Administration began illegal investigations, and multiple coup attempts, against Donald Trump that were spearheaded by CIA Director, John Brennan.

Just after the Berlin Wall and the Soviet Union “fell” in 1991, General Chi Haotian, in China, discussed the imminent need for China to challenge the United States for the express purpose of taking over North American land and resources so that the Chinese people could expand. He made these remarks in a much longer, more detailed speech to the highest levels of the Chinese military: It is historical destiny that China and the United States will come to unavoidable confrontation on a narrow path and fight each other!

Only by using non-destructive weapons that can kill many people will we be able to reserve America for ourselves. There has been rapid development of modern biological technology, and new bio-weapons have been invented one after another. Of course, we have not been idle. In the past years we have seized the opportunity to master weapons of this kind. We are capable of achieving our purpose of “cleaning up” America all of a sudden.

In November 1998, Col. Stanislav Lunev, a defector from the Russian military, was asked how a successful nuclear attack against America could be carried out. He said, “If you ever hear that Arab terrorists have attacked an American city with nuclear weapons, don’t believe it.”

“Because,” he said, “it will be my people. It will be [Russian] Spetsnaz.”

In 1999, Col. Lunev was asked when China and Russia might launch a war against America.

Lunev said, “When they can no longer get money from the West.”

In 2018, President Donald Trump began a trade war with China as one means of challenging their growing power at the expense of Americans. This was but one challenge to China imposed by President Trump since taking office in 2017.

In November 2019, one year before the next Presidential Election in America, the Chinese Virus appeared.

The American left, the deep state, reds/leftists around the world – from Merkel to Xi to Putin to Macron – feverishly and desperately want Donald Trump out of the White House.

Look across the nation at the states that are not re-opening. Most are run by and populated by leftists who want our economy to crash, who want people to be dependent upon government versus capitalism, who want globalism to prevail and Donald Trump and America Firsters to fail.

COVID was a political assassination attempt.

For more than 100 years, the leftist forces of the world have been working diligently to weaken, undermine, and ultimately destroy America. An objective and honest assessment of America, and Americans, in 2020 should help penetrate the Normalcy Bias gripping most of our neighbors.

Our education system is not broken. It was infiltrated by leftists and turned against American ideals. Consider: The Communist Chinese Confucius Institute is still affiliated with the University of Idaho.

Our Judiciary was infiltrated by Enemies of Liberty in Jefferson’s time, getting a 100-year jump start on those who would begin infiltrating academia!

American morality has not ‘evolved’. It was perverted, destroyed, and resurrected as a new morality by leftists wielding Evil. The perversions of the LGBTQQIP2SAA brigades are not merely mainstream; they are lifted up by our elite. Our corporations pay homage to them dutifully. The demand is not merely that we exhibit tolerance; we must accept, embrace, exalt, and genuflect to their chosen lifestyles.

Our economy has not stumbled. It was betrayed, gutted, shipped, and contracted to our global enemies in the name of Free Trade, to benefit Evil. This was done by leftists who have infiltrated our national politics and corporate boardrooms. This was perpetrated by the me first corporations who place short-term profits above patriotism and loyalty to American ideals.

Our political system has been overtaken by self-serving, corrupted souls who, in their quest for votes and power, pander to the lowest and slowest among us. A simple ideological assessment of most sitting American politicians reveals that, whatever label they may choose to embrace, they are, in reality, leftists. Only shades of pink separate most Republican politicians today from their counterparts ‘across the aisle’.

Indeed, the leftist labels of Socialist, and even Communist, are no longer understood to be fundamentally un-American. Just ask Bernie and his Bros.  Look to the Squad.

The leftists, reds, and tyrants currently succeeding at bringing America to her knees murdered well over 110 million people in the 20th Century, most of them in their own countries; 330 million Americans are merely the final obstacle in their long-term war.

COVID-19 is merely another weapon being used against us and our way of life.  “Just wear the damned mask!” is simply the current iteration of “Just bake the damned cake!” intended to cow Americans into obedience and submission.

Again: One of the earliest and most profound mistakes made by American Patriots happened immediately following the Yorktown surrender of Cornwallis – Patriots failed to eject or kill every single Loyalist who was still on the continent.

Let us learn from that mistake and endeavor to extirpate every Enemy of Liberty on American soil as part of the remedy to the attempted coup against President Trump.